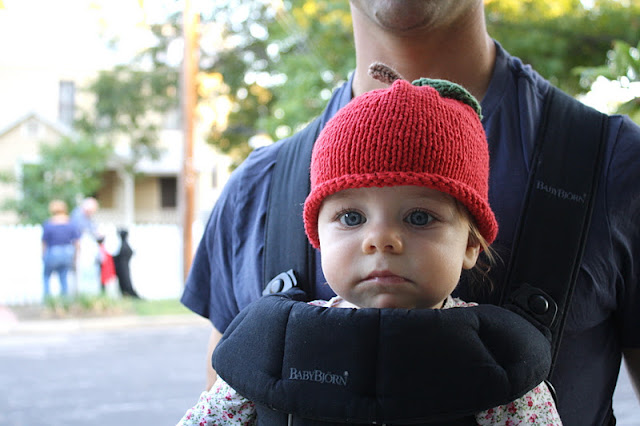 “Becca, it looks like people are going trick-or-treating around here.  Wanna come?” Elliott called up the stairs.

“Hmm… she could wear her hat.  The apple one,” Elliott suggested.

I couldn’t help laughing as I pushed the almost-too-small knit hat down over Lena’s ears.  It was a pretty lame last-minute Halloween costume, but she still looked stinkin’ adorable.

I should note that thus far that day I had felt very removed from Halloween merriment that I love.  My sister-in-law had sent several photos that afternoon from the Lawn of UVA, where hundreds of Charlottesville parents and their children were trick-or-treating from Lawn room to Lawn room, crunching fall leaves, mingling with students, and soaking up the autumnal holidays in true fall weather.  I had also been remembering last year in DC, when Elliott and I walked down East Capitol St to a Shakespeare production at the Folger, winding around and through groups of darling trick-or-treaters making their way down the main thoroughfare of Capitol Hill.  Here we were, in America and with a little darlin’ to dress up, but far from our favorite Halloween scenes.

Yet as we walked out into our neighborhood, we discovered that we had landed in another neighborhood that celebrates the storybook side of Halloween.  We made our way down the street past the gathering groups of little trick-or-treaters, each in the most fabulous costume their imaginations could design this year.  The parents and grandparents (and, yes, even the maids) of all beautiful King William homes were out on their front stoops, waiting for the little Belles and Raggedy Andys and escaped convicts and flower children to come dig their sweaty fists into straw baskets of M&Ms and Peanut Butter Cups.

“Would mom and dad like to trick-or-treat too?” one understanding homeowner asked, proffering a basket of goodies.  Bless her soul.  Yes I would.

Thus far in her life we can still convince Lena that flowers are just as much fun as candy.  Probably by next year she won’t be so gullible. 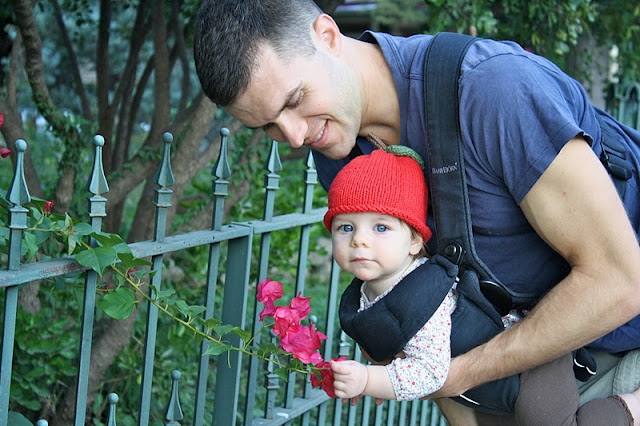 I wish I could have taken pictures of all of it, but in general parents don’t like strangers taking pictures of their children.  So we contented ourselves with a leisurely walk to admire costumes and decorations.  Later, long after we’d put our tired little apple to bed, we could hear the merriment and music and calls of “trick-or-treat!”  A sweet little Halloween after all.

3 Responses to halloween in San Antone