First thing in the morning, we set off for the Blue Grotto on the western side of the island.  Pretty little skiffs tugged at their moorings as salty Maltese boatmen caught up on last night’s gossip before beginning another day. 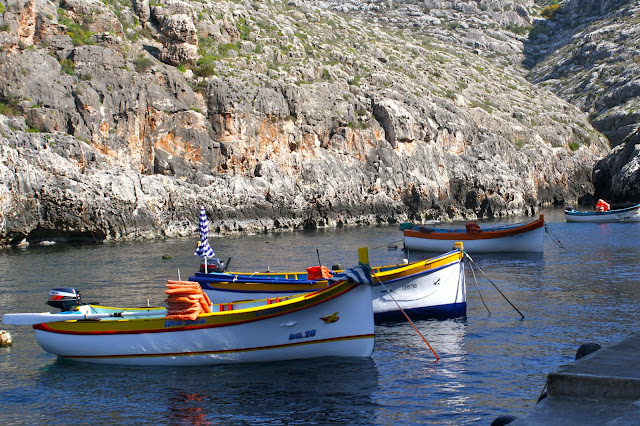 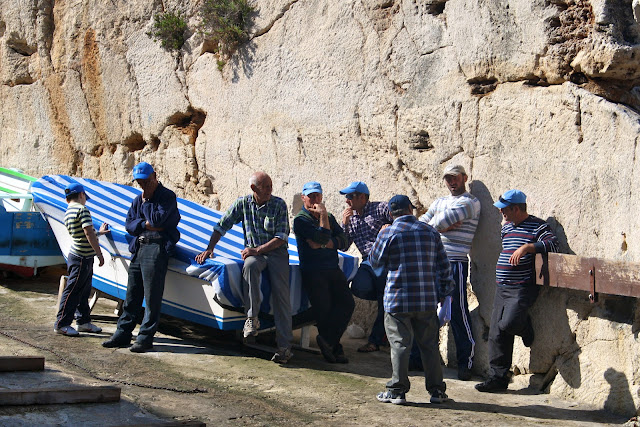 We waited for our own ride around the Blue Grotto: 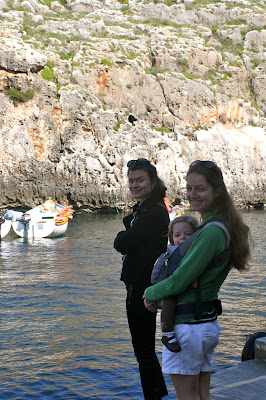 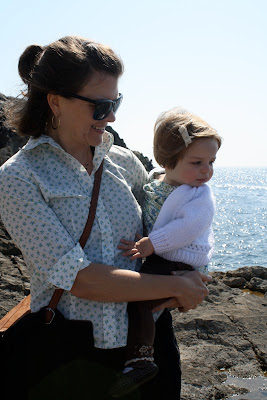 And what a lovely ride it was!  We dipped into different caves formed by years of water washing on rock.  Beneath the crystal clear water we could see the deceptively fragile forms of lavender-hued jellyfish, their long tentacles streaming behind them. 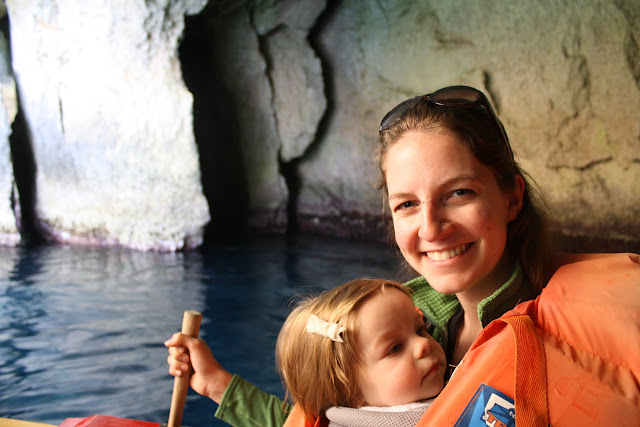 Afterwards we walked along the rocky beach for a short distance and then sat down in the sunshine.  Lena discovered a little hole in the rock that was filled with seawater from last night’s high tide.  She dipped her hand in experimentally and then tasted the water on her fingers.  Wowza!  Salty and so yummy!  She proceeded to dip her hand in over and over, licking the salt off each time.  Here’s a video:
Later we drove to visit the temples at Hagar Qim.  Our Malta guide book suggested that you could see them fairly well without paying the entrance fee, and Lonely Planet was right, as usual.  We followed the paths between the two temple sites and looked through the fences at the ancient ruins.  In that way the setup reminded me of Stonehenge.  This photo is from the edge of a cliff near the temples.  What a view! 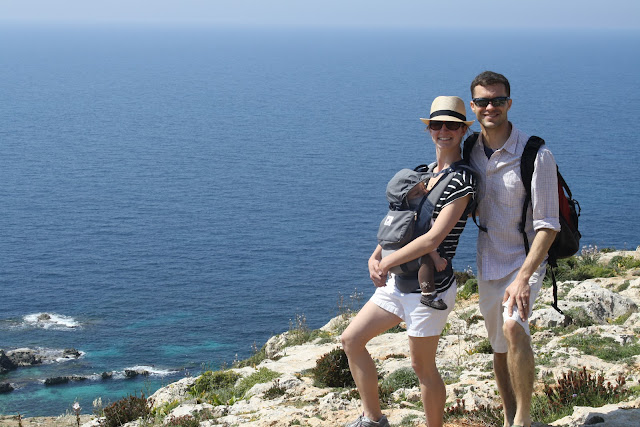 We had just watched Gladiator again in our hotel room the night before, and these fields of wheat reminded us of the classic scenes of “the Spaniard” smoothing his hand over the heads of wheat on his farm in every dream sequence.  Much of The Gladiator was filmed in Malta, believe it or not, as well as other films like The Count of Monte Cristo and Casino Royale.  Like Italy was for spaghetti westerns, Malta is cheap. 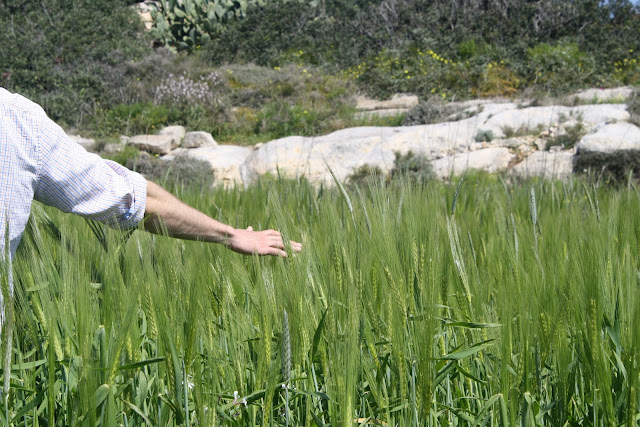 By this point it was high time for lunch, and we were starving.  Lonely Planet recommended Ghar Lapsi, a nearby town, which consisted almost entirely of three restaurants and a little stretch of rocky beach.  Lena got her feet wet for the first time in Malta.  She loved it! 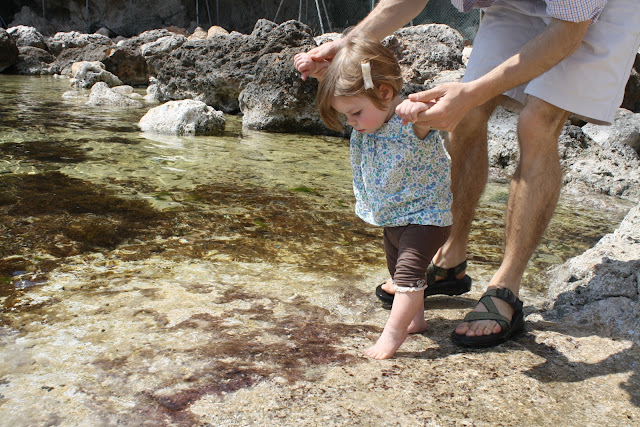 Telling us all about it… 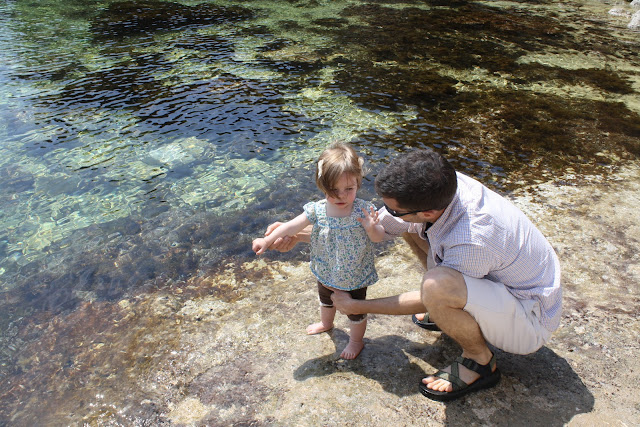 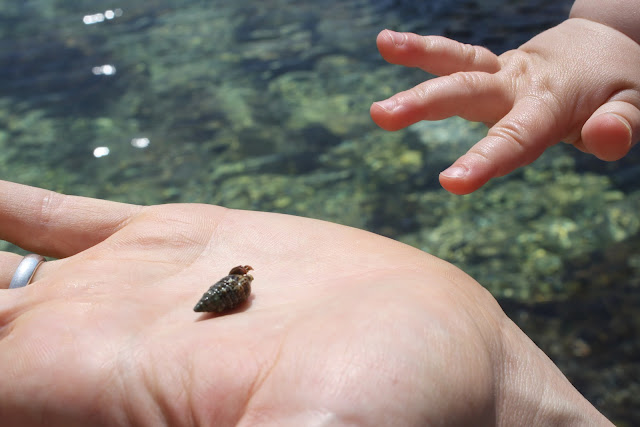 In the Blue Creek Restaurant, we ordered their risotto con calamari al nero de seppia, or calamari risotto in squid ink.  Lena and I loved it, but it looked like she was eating mud! 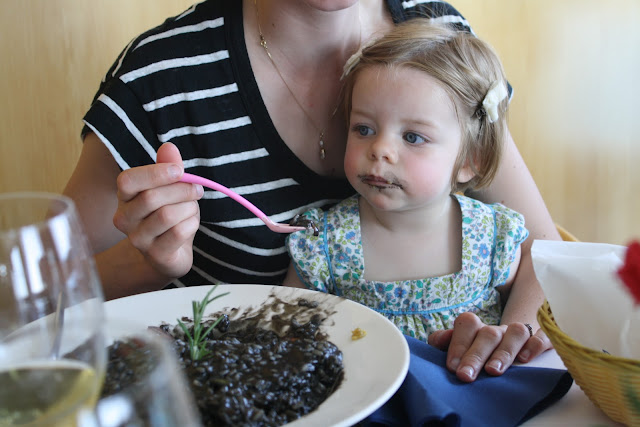 At this point, with our departure time approaching, we chose to spend the last few hours in Malta on one of the recommended beaches.  Although chilly in April, it was a peaceful way to leave the island.  We watched teenagers kicking a soccer ball around and listened to them speak in their strangely clipped English, the language of upperclass Maltese.  We finished off the wine from lunch, read a few lines of our books, watched the sun dip into the sea, and kept an eye on our little explorer, Lena. 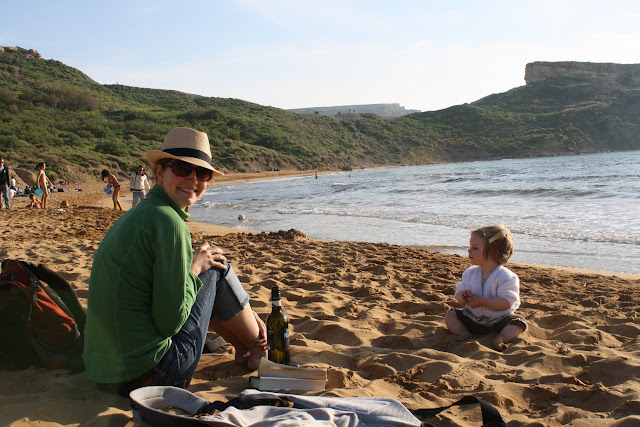 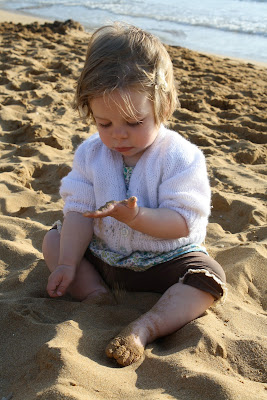 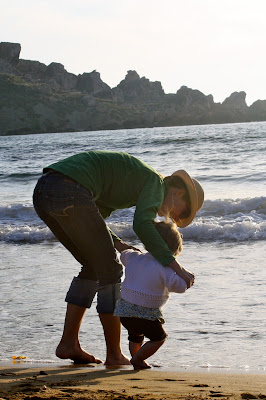 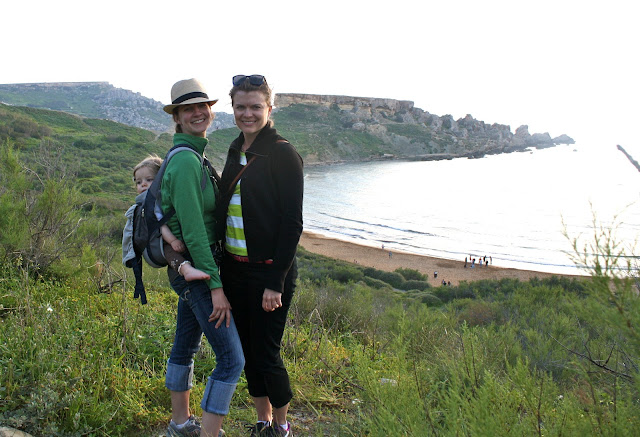 And then at last to the airport and then home, where we finally slipped little Lena into bed around 11pm.  Malta was, like I said, a short and sweet trip for us, but a beautiful one (especially this time of year!) and we’d recommend it to anyone.  If you’re coming our way to Sicily, we can suggest an inexpensive flight or ferry ride and you’ll be on your way to Malta for the weekend!