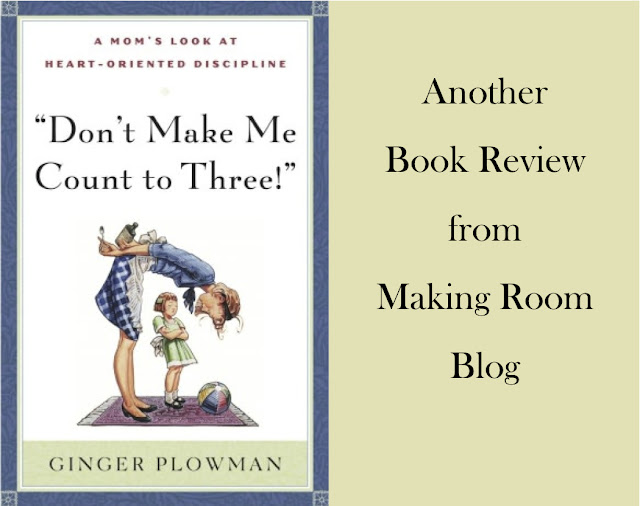 See my other parenting book reviews here and here.

I picked up Don’t Make Me Count to Three!

in my parents’ church library a few weeks ago.  The very fact that I did pick it up and check it out, I think, is a sign of the worries in my heart these days.  Like I groaned about here, my little baby has turned into a toddler, and she has a lot of ‘tude to show for it.
Of course I love her spunky determination and—within reason—her bright-eyed sass.  But occasionallyfrequently she uses that determination and sass to demand that I open a package of cookies for her in a store, or to reply “no!” when I tell her what I would like her to do, or to throw a tantrum at the dinner table.  Then it is time to lay down the law.
But how does a mother do that?  How do you decide what you will allow and what you will not?  How do you respond to blatant disobedience and even toddler rage?  How do you control your own boiling anger at the same time?  How do you discipline graciously and thoughtfully?  And what form of discipline should you choose?
Anyway, end rant.  I read Ginger Plowman’s slim, straightforward little volume

and found answers to some of my questions.  In the end I gave the book four stars on GoodReads (I’d love to be your friend on there!) because I didn’t love her writing style and am not sure if I agree with all her methods and suggestions.  However, I’m a young mom, and she is not, and I found a great deal to glean from the book.

Here are a few things I want to put away for future reference:

Part I: Reaching the Heart of Your Child
If you asked me before I read this book what it means to “discipline” Lena, I probably wouldn’t have had a good answer, partly because the word “spanking” makes me really uncomfortable to talk about in public and partly because I just hadn’t really thought about it that much.  One huge take-away from this book for me is that the whole act of disciplining Biblically involves not just time out/spanking/whatever you choose but alsoteaching and instruction.
Fathers, do not provoke your children to anger,
but bring them up in the discipline and instructionof the Lord. – Ephesians 6:4
The rod and reproof give wisdom,
but a child left to himself brings shame to his mother. – Proverbs 29:15
When [our kids] disobey, we think we have done well to say, “That was wrong, and you shouldn’t have done it… (whack, whack, whack) now, get in your room!”  When we do this, we have only done half of what God has called us to do.      (p 27, emphasis mine)
Now that I know that telling Lena she did something wrong isn’t enough… what do I do?  How do I reach her heart, where the sin lies and the wrongdoing begins?  The author offers this scenario that illustrates what you could do and what you shoulddo to really get at the heart of the issue and the heart of your child:
A while back, [my son] Wesley was going through a time where he was intentionally aggravating his sister.  He would get down on all fours like a lion, snarling, growling, and drooling….  I sounded like a broken record all day long!  “Wesley, stop!”  Wesley, quit!”  “Wesley, Alex doesn’t like that!”
… Eventually I realized that I had to work backwards from the behavior to his heart.  Each time he began to aggravate her, we would go through a very simple line of questioning.
Mom: “Wesley, judging from your laughter you seem to be having a great time growling and chasing your sister.  Are you having as much fun as you look like you are having?”
Wesley: (raises one eyebrow in curiosity) “Yes, ma’am.”
Mom: “Is Alex having as much fun as you are?”
Wesley: (squirming a little) “Well, no, ma’am.”
Mom: “Tell me, what is Alex doing?”
Wesley: (pausing for a moment and looking down) “She’s screaming and crying.”
Mom: “Honey, are you delighting in Alex’s suffering?  Because love does not delight in evil.” (1 Corinthians 13:6)
Wesley: (with a look of understanding followed by a look of sadness) “Alex, will you forgive me for making you cry?”
Now, I know what you are thinking.  This sounds pretty idealistic… and Mom sounds super preachy here.  At least that’s how it came across to me.  But as I read on in the book, I was challenged by this approach that the author takes.  As she says in her book, the Word of God does not return void (Isaiah 55:11), and I think she is right to use Scripture as part of her reproof.  Plus, she is doing some serious digging here to get to the heart of the issue rather than just telling him, “Wesley, I have told you to stop, and you have not stopped, so go to your room for a 10-minute time out.”  Significant difference in getting to the heart of the issue, right?
Of course, I can’t talk to Lena this way now.  She’s just 18 months old!  So how do I get at the heart of the issue when disciplining her?  The next section gave me some guidance. 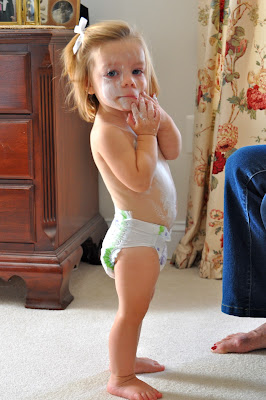 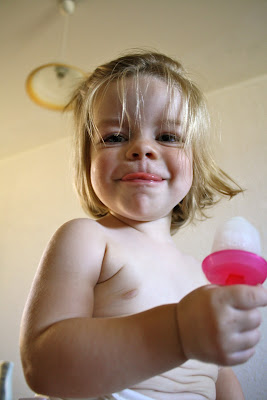 Part II: How to Give a Biblical Reproof
Two illustrations in Part II of this book encouraged me in ways I can guide and instruct Lena as I discipline her.  The first is to provide a way of escape and the second is to apprentice her hand in hand.
Caring for a puppy is a good way to illustrate the first principle. What if the first time the puppy does his business on your carpet, you punish him for doing so… but then you don’t show him the outdoors or praise him for going outside?  Instead, every time he uses your rug as his toilet, you punish him severely and never show him a way to please you.  Pretty soon the puppy will run into a corner whenever he needs to go, hiding from you and the punishment that is sure to follow.  When you come to discipline him, your adorable puppy will eventually turn on you, snapping and biting, frustrated and confused.
What a convicting illustration.  How often do I just say to Lena, “No!” instead of taking the time to also patiently teach her what I prefer her to do?  How often do I crack down instead of providing a way out for her?  How often do I say, “Instead of throwing your food on the floor if you don’t want it, just put it back on the tray, like this,” all the while guiding her hands and then praising her for doing it correctly.
This leads to the second big take-away from this section for me: to apprentice Lena hand in hand.  The author includes a lengthy illustration of an old-time craftsman who would teach by literally placing his hands on top of his apprentice’s as he instructed him in the craft.  The craftsman didn’t yell at their apprentice for breaking a crucible or spilling molten silver.  Instead he took the time to guide and instruct the apprentice hand in hand until the apprentice got it right.
[Y]ou haven’t disciplined a child properly until you have brought him to the point of repentance by requiring him to practice the biblical alternative to his sinful behavior…  Biblical discipline involves correcting wrong behavior by practicing right behavior, with the right attitude, for the right reason, until the right behavior becomes habitual.                                                                                      (p 66)
Part III: The Biblical Use of the Rod
Every parent must decide with their spouse whether or not to spank their child.  It is a very personal (and now very political) decision.  Because of this, I wondered how the author would address spanking.  Well, surprise surprise, she does take the position that you should spank your child, and even that there is Biblical instruction to spank your child.  I’ll leave this section to you to read; it’s quite interesting!
Spanking aside, there were other points she made in Part III about discipline that stuck with me.  There were the worldly methods that parents use to obtain obedience (pp 101-106).  Maybe these stood out because… umm… I use them a lot?!
Also, I was struck by her list of reasons why spanking does not work:
1.     Lack of consistency—“It is not the severity of correction which will produce obedience; it is the certainty of correction which will bring about the desired result.  Be consistent in your administration of discipline.  Never, never, never issue a warning or a command without following it through.” (p 113)
2.     Lack of persistence—“For the moment all discipline seems painful rather than pleasant, but later it yields the peaceful fruit of righteousness to those who have been trained by it.” (Hebrews 12:11)
3.     Lack of effectiveness—“If little Johnny is sporting an extra-padded diaper and running in circles while Mom halfheartedly administers the rod, the spanking in ineffective.” (p 114)
4.     Lack of righteousness—“When the rod is administered in sinful anger or with a wrong motive, the child will resent rather than repent.” (p 115)
There is so muchto ponder in this book.  As a young mother, I felt like this book had a lot of wisdom and instruction, as well as the answers to a great many questions in my mind and heart.  I so desire to love and guide Lena well, to teach her and train her up in the way she should go.  As Elliott and I discuss what I read in this book and decide how to apply it to our parenting, I pray that we will remember these words from the Book of Common Prayer.  Our church in D.C. prayed this prayer together every Sunday:
“Lord, you have blessed our [family] with the joy and care of children.  Give us courage, patience, and wisdom as we bring them up in the faith that they might never know a day apart from You.  Amen.”

6 Responses to Book Review: "Don’t Make Me Count to Three!"