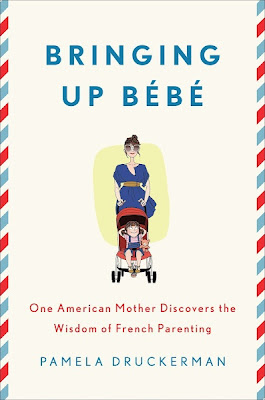 As I mentioned yesterday, I’ve loved reading Bringing Up Bébé this week.  I’ve had my eye on the book ever since it was reviewed in the New York Times earlier this year.  I don’t know what made it so instantly appealing to me.  Maybe because of the idea of a cross-cultural study in mothering?  We live in Italy partly because we’d love to raise our kids overseas as much as possible.  Or maybe because it’s a study of mothering in another culture in general?  Or maybe it was just because it promised to discuss the lives of obedient little gourmands.  Set in France.  Sounds like non-fictional chick lit.  Is there a name for that genre?

Anyway, finally it came to a library near me, and I read the whole book in two days.  I honestly wish I owned a copy so that I could mark it up and remember all my thoughts and revelations as I read, but c’est la vie.  This is my version of notes in the margins.

I should say that Bringing Up Bébé has received its fair share of criticism, partly because it’s written by an American trying to summarize an entire subset of French culture, and because the author Pamela Druckerman focused only on her social niche in France (namely, middle class Parisians).  However, as I know next to nothing about French culture and middle class Parisians, I chose instead to enjoy the book as a study of some parents that Druckerman knows who have gotten some things very admirably right.

Although the book discusses much more than I will cover here, the main take-away topics for me were the attitude of French mothers towards themselves and their children, their infants’ sleep habits, the French emphasis on waiting, their young children’s varied palates, and the authority that forms the backbone of French parenting.

an occasional francophile
“Bringing Up Bébé”

8 Responses to "Bringing Up Bébé"