August 24, 2011 at 7:13 pm
This past Saturday we drove up to Mt Etna, the sweeping volcano that dominates the skyline on the eastern coast of Sicily.  I thought we were going to explore some quiet hiking trails around the base.  Elliott thought we were going to climb the whole thing.
We pretty much climbed the whole thing.
But there was more involved than just climbing steep gravel trails.  There were ash clouds and eruptions, cable cars and anxiety.
When we pulled into the parking lot, Elliott noticed a dark cloud overhead.  Within a few seconds volcanic ash began to fall from the volcano.  I thought volcanic ash was thin, light, and floating.  Not so.  Look at the stuff in Elliott’s hand: 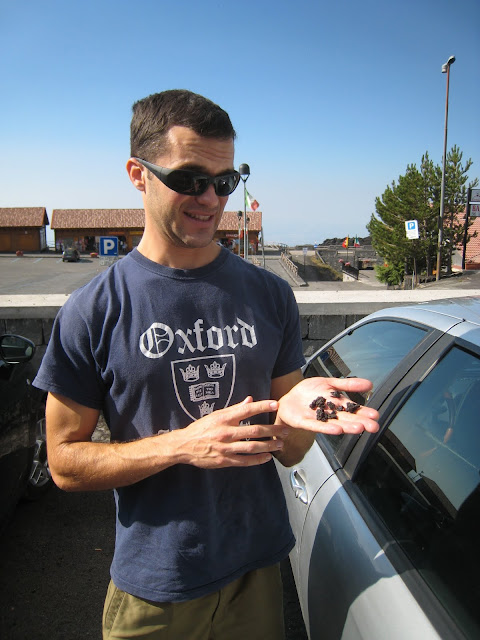 Everyone began to run for cover as the chunks of rock began to fall faster and grow larger.  The biggest pieces we saw were the size of golf balls.  They could cause some damage, but they didn’t weight nearly as much as golf balls; the rock was very porous.  Witness a video Elliott took here.
After about 10 minutes, the slow volcanic rain subsided.  Elliott had meanwhile learned that there were 2 ways to get to the top of Mt Etna:

Perhaps needless to say, we decided to walk.

The trail began running parallel to the winter ski lifts.  It will be fun to come back when there’s a blanket of snow! 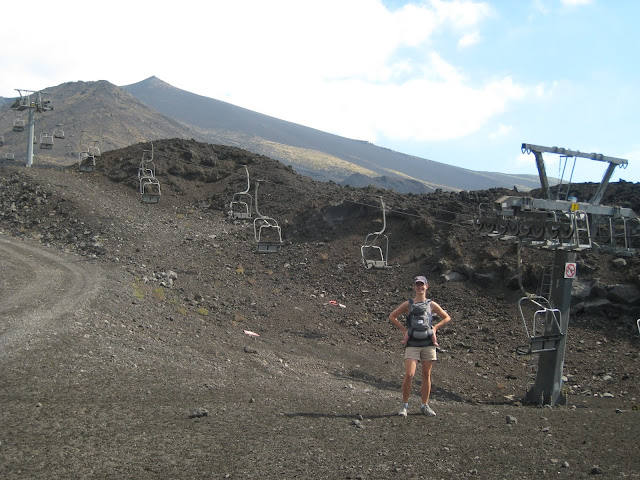 We climbed higher.  People had told us “hiking Etna is like walking in sand.”  This isn’t true.  It’s like walking up a steep gravel path.  For hours.  And hours.  You don’t slide backwards or lose ground if you stick to the paths, but you might if you off-road it and try to hike up the loose gravel.

Within about 15 minutes of steep climbing, we were beginning to look at the cable cars with longing. 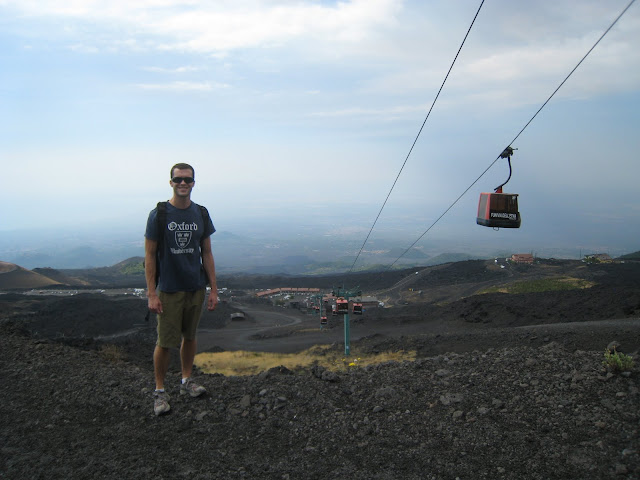 The landscape quickly turned gray and monotonous.  Then suddenly we found this little guy on our path.  A ladybug never seemed so out of place or so vibrant. 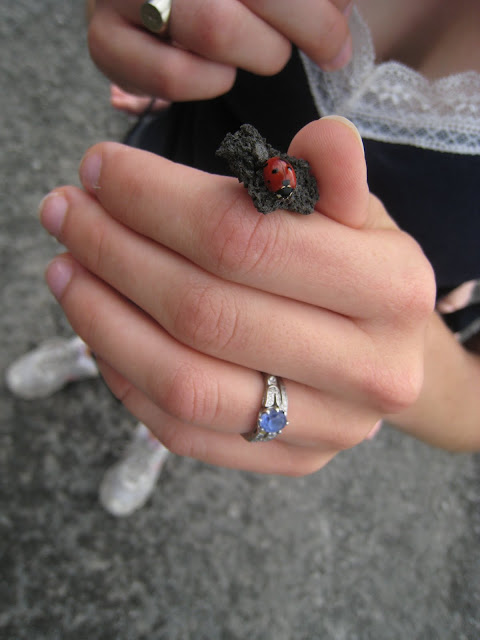 We walked and walked and walked.  Up and up and up.  I noted that we’d have a quite a monopoly on rock if we were playing Settlers of Catan.  I’ll trade you rock for sheep… or brick… or wheat… anything, actually.  I’ve got the rock port this game! 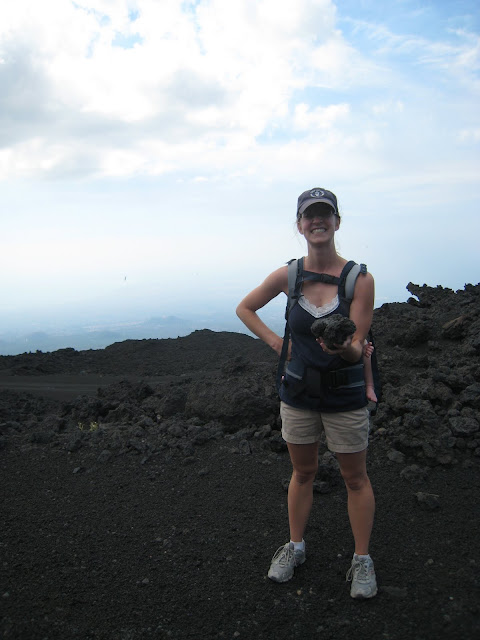 We eventually reached a rest stop after about 2 hours of climbing.  The cable car stopped here and everyone spilled out into a restaurant and little souvenir area.  Jars of honey sat on a counter for taste testing, and we sampled a half-dozen different flavors: orange and lemon and eucalyptus and nut.  All so removed from this desolate place. 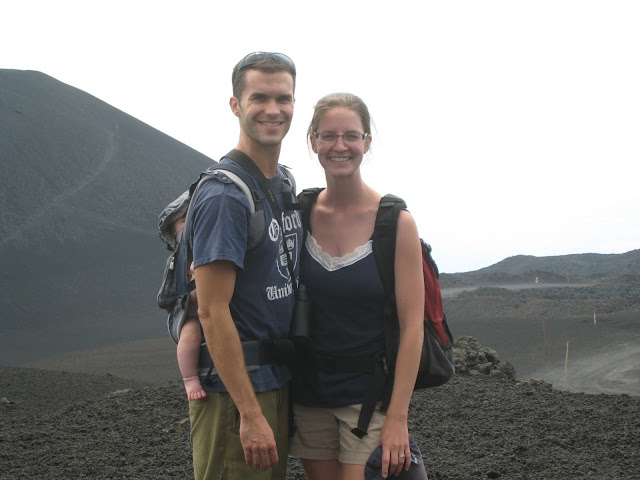 We ate lunch and then continued on for the second half of our climb.  We had left the green Plain of Catania and the glorious coastline far behind, but through Elliott’s binoculars we could still make out the base and the little town of Motta far, far away. 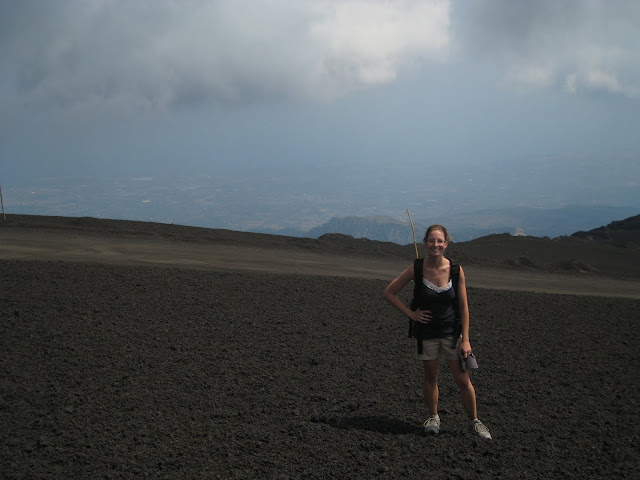 Towards the end of the hike we off-roaded it a little bit to try to cut out some climbing town.  Does this give you any idea of how steep it was?  At this point especially Elliott really had to encourage me… the end was nowhere in sight. 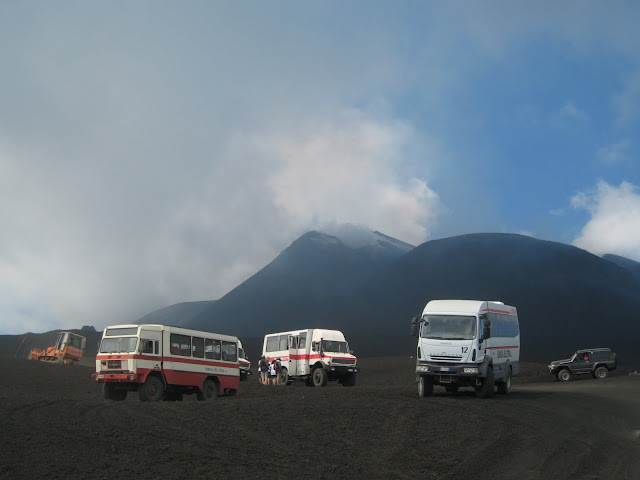 And then finally we came upon a cluster of rough terrain vans, the type that had been sweeping by us on the road all morning filled with tourists.  We’d reached the top! 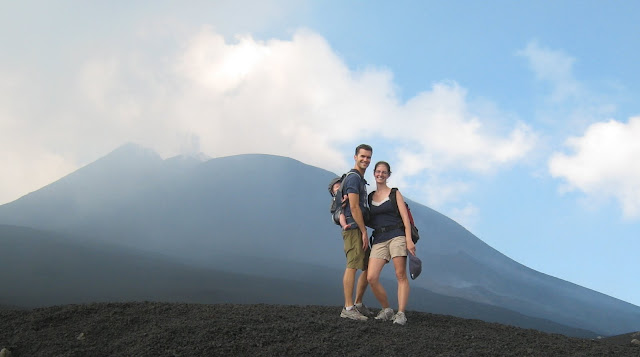 And there she is!  The top of Mt Etna as close as you’re allowed to get.

Suddenly as we watched there was a gush of hot orange lava on the side of the volcano, and then a boom like a distant cannon and a black cloud burst from the mouth of the volcano!  Everyone gasped and jumped back as dark ash spilled forth into a mushroom cloud over the mountain.  Elliott grabbed his camera and began to film.  You can watch that video here.

After a time the rumbling stopped and we had a few minutes to take pictures. 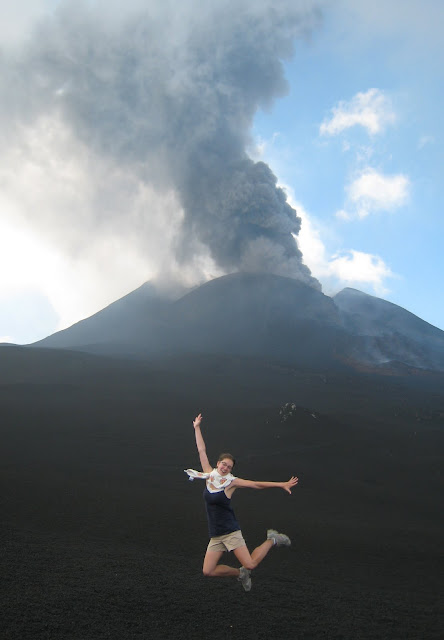 Lena peered out from her safe spot. 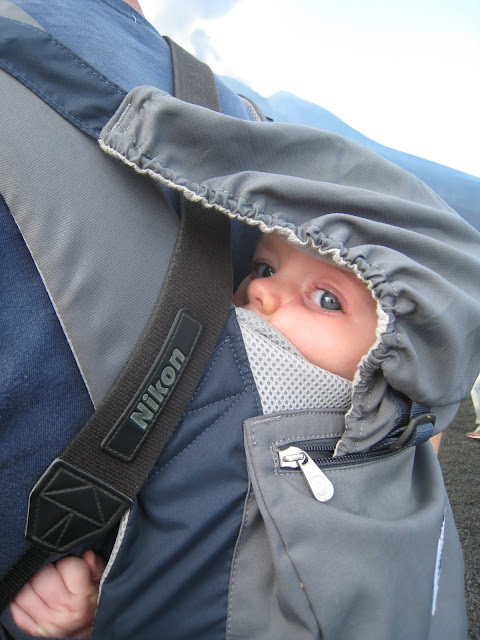 About that time the guides/bus drivers received messages through their walkie-talkies that the top was now closed.  They began to herd us off the top of the mountain and down the steep slopes again.  We slipped onto one of the vans unnoticed and were able to ride halfway down the volcano that way.  Along the road the guides stopped the vans next to weary hikers and told them to turn around, the top is chiuso, closed.  We looked at each other, grateful we’d had the reward at the top instead of being turned away in the middle of our exhausting climb.

At the bottom of the mountain, aching in every muscle, we pulled off our shoes and socks.  There’s some more volcanic ash to take home! 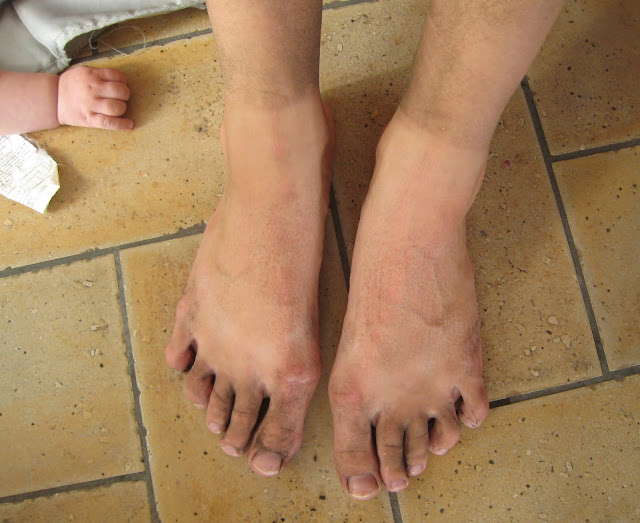 We were hesitant to head right home when we had already driven so far to see Etna.  We’d heard about a gorgeous little town near the mountain, and so we took a circuitous route home in order to see Zafferano Etnea.  We were not disappointed… it is the loveliest little town we’ve discovered thus far! 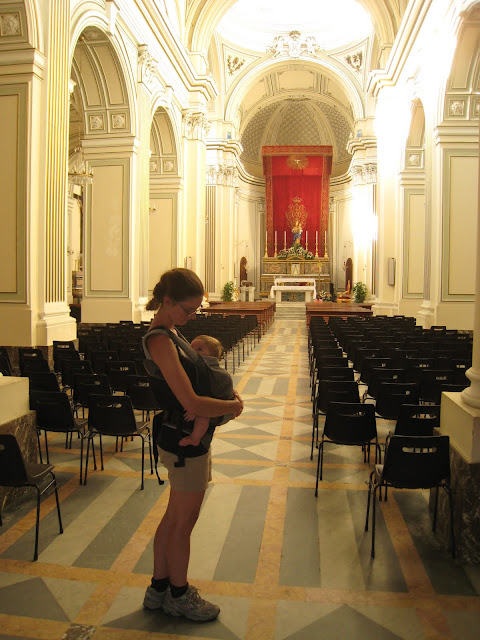 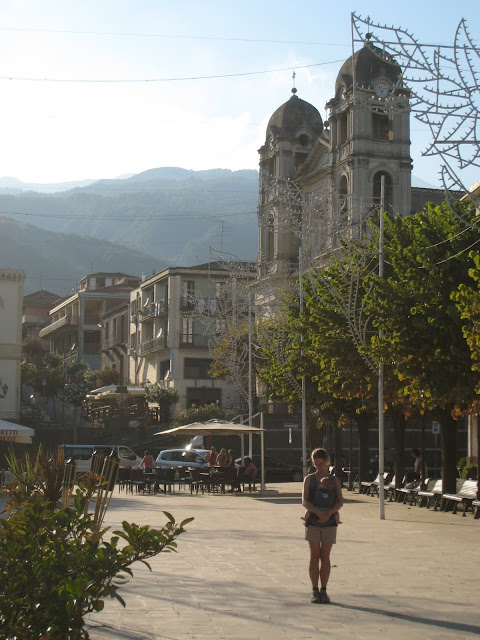 We bought some of that delicious honey (orange flavor, or arancia, for us this time) in the town as well as some fresh bread.  Ahhh what a sweet reward at the end of the day!  We dipped hunks of bread in the honey as we explored a beautiful park that looked out over the valley and the coastline. 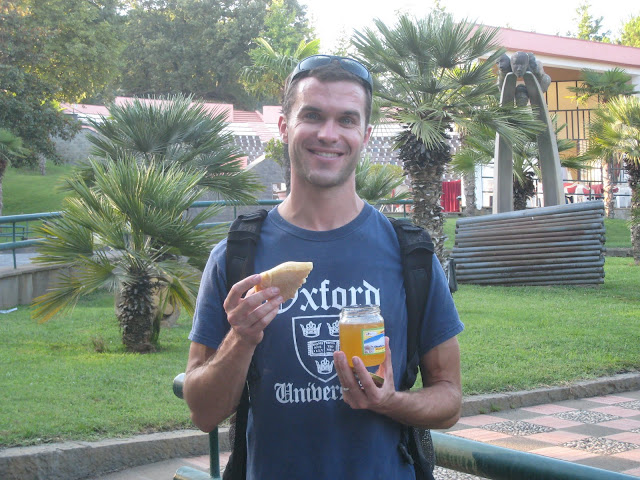 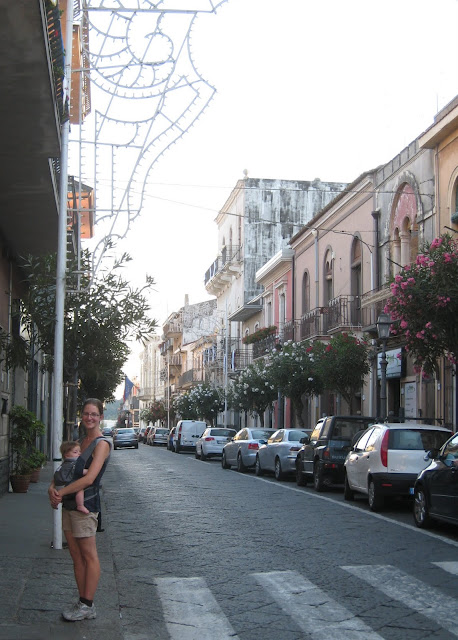 And finally we headed home for base, massaging aching legs.  I threatened the whole way up that I’d never climb Mt Etna again, but already when I look up at her each day, I wonder…

4 Responses to Climbing an Erupting Volcano