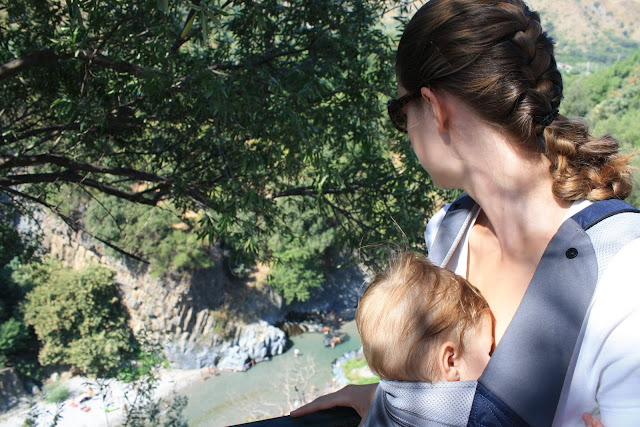 Earlier this week Elliott was still enjoying his four-day weekend and we were ready for more adventure.  Sunday had been a quiet day with church, a nap for Lena (usual) and me (very unusual) in the afternoon, and then community group with some friends.  So on Monday, rested and ready to go, we paged through a guide book and looked over a map.

We chose to go to Gole dell’Alcantara.  Gole means “gorge” in Italian.  The guidebooks described it as a green and lovely place with a cool, rushing stream.  Without much more to go on, we got in the rental car and took off along winding Sicilian roads.

(By the way, sometime I’m going to take a video while Elliott drives around here.  It’s exciting.)

After about an hour of driving we found the gorge.  For 8 euro we were admitted to the trails around the gorge.  A half-dozen lookout points along the hiking trails revealed glimpses of a sparkling river below and a growing number of Italian families coming to sunbathe and relax.

This spot along the trail reminded us of our favorite place at Laity Lodge, a retreat center in Texas that we visited last summer before Elliott was deployed.  The water is deeper, wider, and much warmer in southwest Texas, but the setting is otherwise similar. 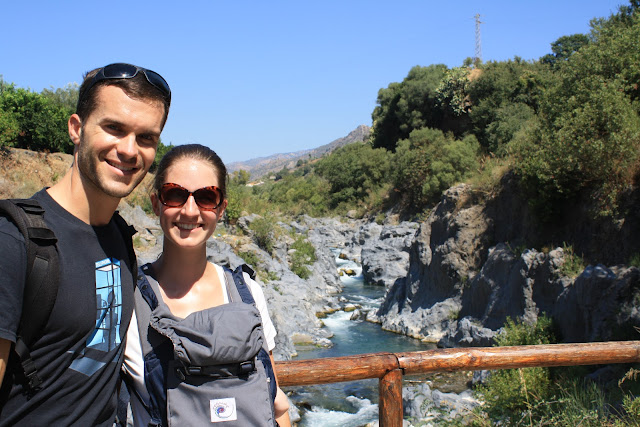 The gray volcanic stone and ice-blue water made such a lovely contrast. 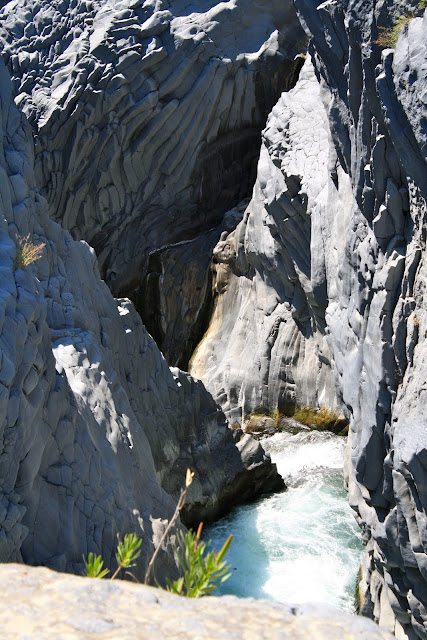 Eventually we walked down a couple hundred stairs into the gorge.  By then it was about 10am and full of people!  The water was deceptively cold; I could hardly stand it, but I guess I was one of the few people who felt that way. 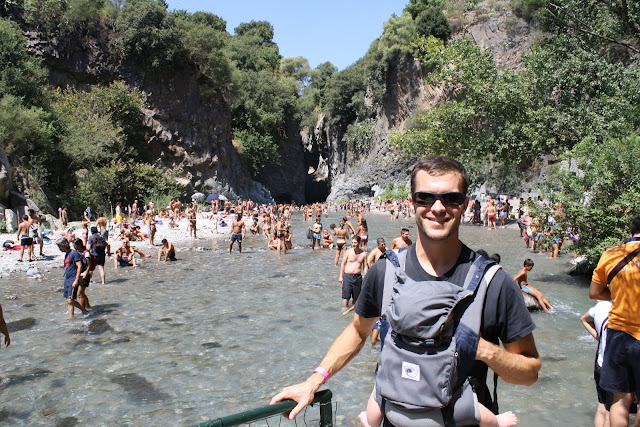 We found a secluded spot to eat the snack I’d packed.  Elliott then dipped Lena’s toes in the water. 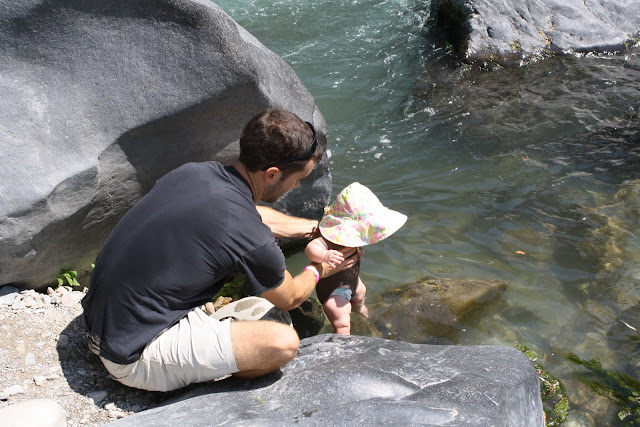 She thought that was okay. 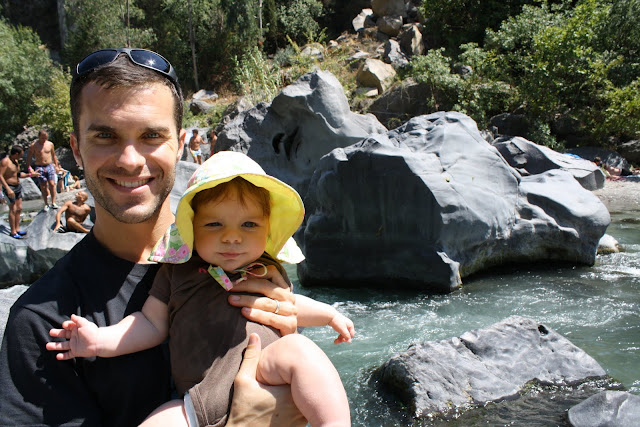 Gole dell’Alcantara is fairly close to Taormina, the lovely town I visited a few weeks ago with my friends and their children.  Elliott and I had the afternoon ahead of us and were ready for a good lunch.  We drove the back way to Taormina and then wound up the hills until we could park at the top of the town.  The view was, as always, spectacular! 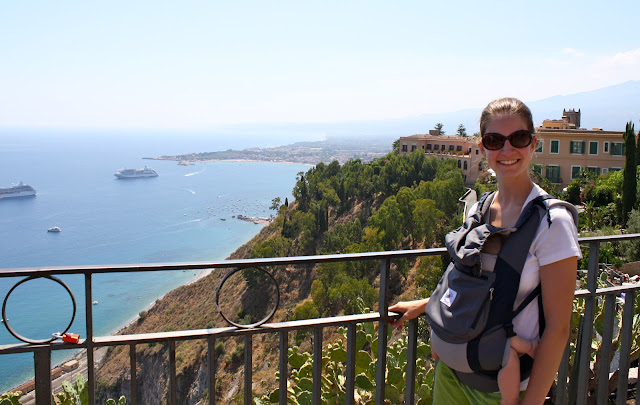 After some guidebook searching and other wanderings we decided upon a pizzeria with an outdoor balcony overlooking the water.  Lena relaxed on the patio floor and charmed all the camerieri (waiters). 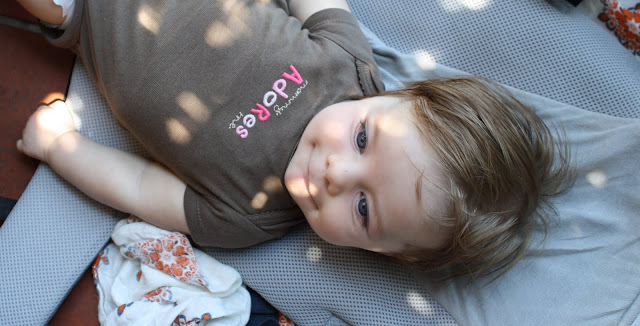 I ordered a pizza with capers, anchovies, olives… and no cheese!  I was devastated.  I’ll read the menu better next time.  Elliott ordered a pizza with smoked ham,”Indian corn” (by which I think they mean the corn that the American Indians ate), and cheese.  We shared over 0.5L of the house wine. 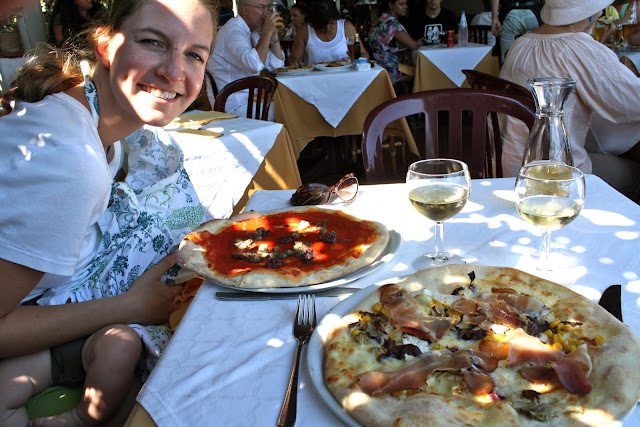 Lena’s getting more and more giggly.  Elliott can really get her going when he tickles her neck! 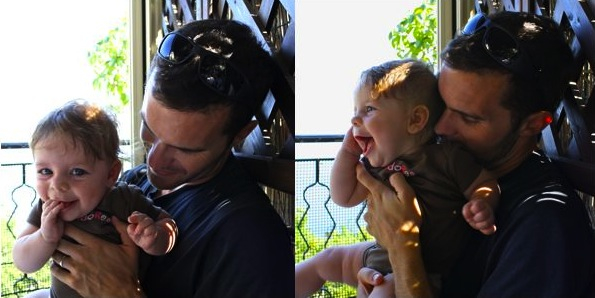 Later we wandered about Taormina, enjoying the architecture and the potted plants on every balcony. 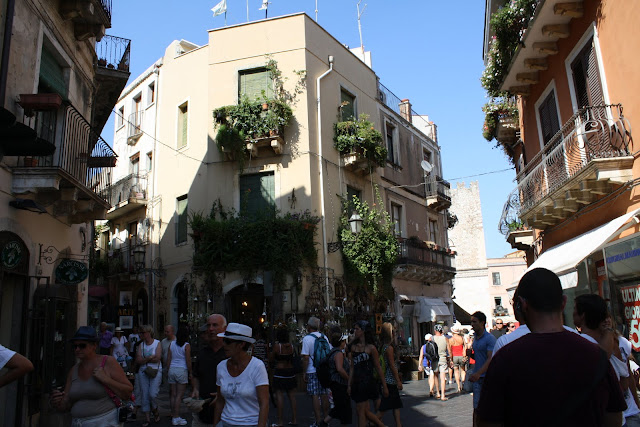 The cruise ships had deposited hundreds of tourists in Taormina that afternoon.  Doesn’t this woman look like she’s straight out of a D.H. Lawrence novel?  (I pick D.H. Lawrence only because he and his wife lived in Taormina for awhile about a century ago.)

A pretty street sign near the famous ancient amphitheater.  The amphitheater hosts all kinds of concerts, including Elton John earlier this summer and the NYC Ballet last week. 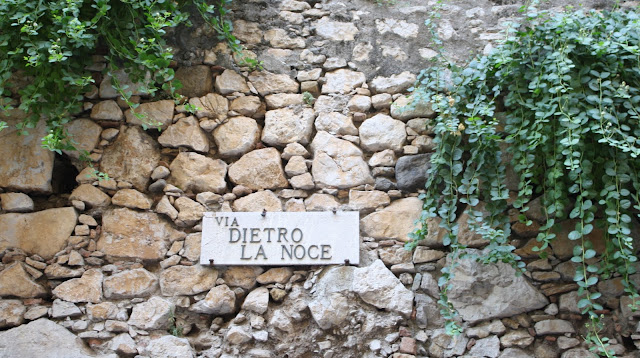 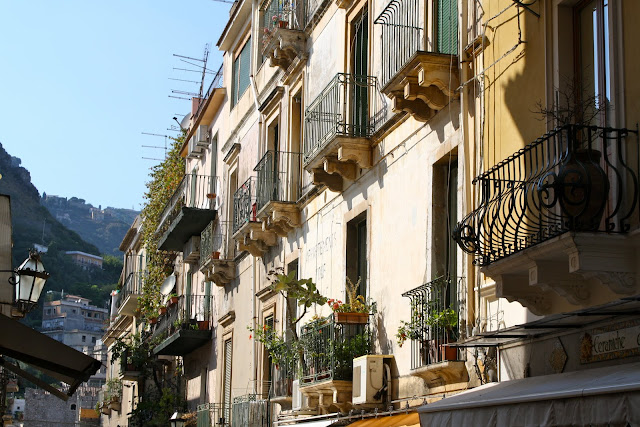 Wares for sale. I want to get one of those mini umbrellas for Lena. 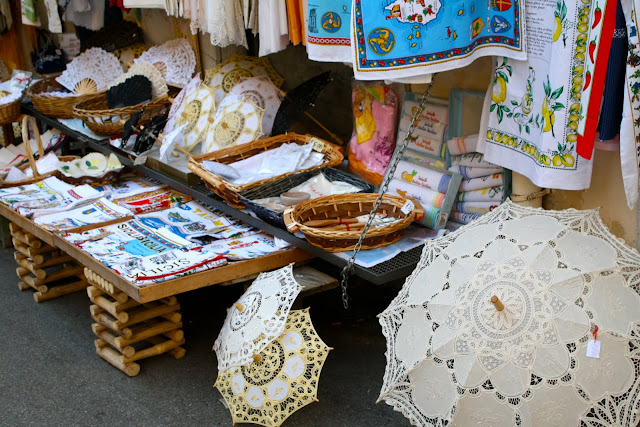 A case of gelati and granite with Taormina reflected in the case. 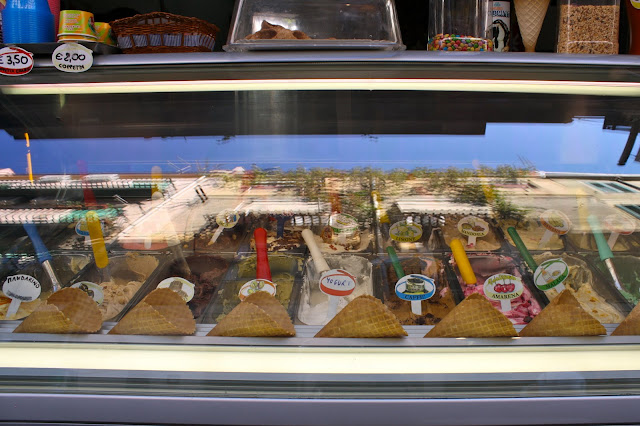 To finish up our trip to Taormina, we went to the best granite shop in town… or at least the best one I’ve heard of in all of my two trips there.  Bam Bar, as it’s called, prides itself on it’s granite artigenale, or handmade granite. 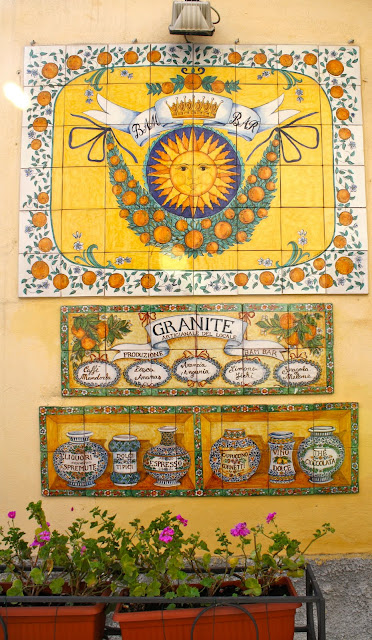 I chose limone e fragola (lemon and strawberry) and Elliott chose limone e kiwi (you guess!).  They were fabulous, fresh, and tangy.  Elliott’s granita was full of tiny black kiwi seeds; I even found a lemon seed in my limone.

Our neighbors were enthralled with Lena. 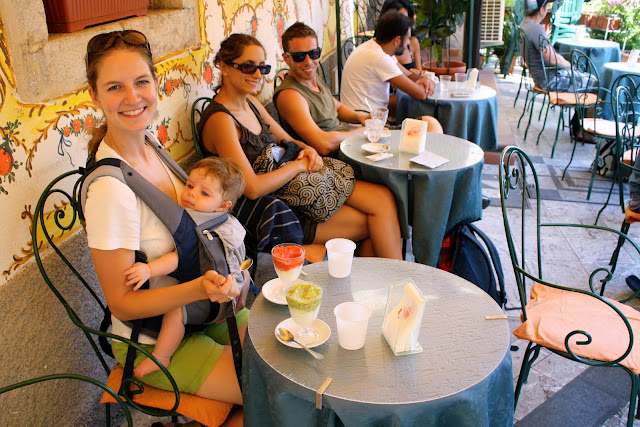 Lena thought about eating kiwi granita, but still doesn’t seem interested enough.  Pretty soon she’ll be able to begin pureed fruits and veggies, but we’re waiting till she’s really opening her mouth eagerly or grabbing the spoon first.  She seems okay with that. 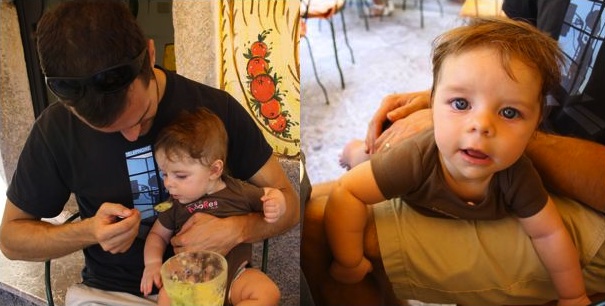