August 13, 2012 at 6:58 pm
Our second morning on the Amalfi Coast dawned so crisp, clear, and beautiful that we almost didn’t mind our daughter rousing us at 7am.  Just look at the view from our apartment!  (If you’d ever like to stay there yourself, here’s the listing.) 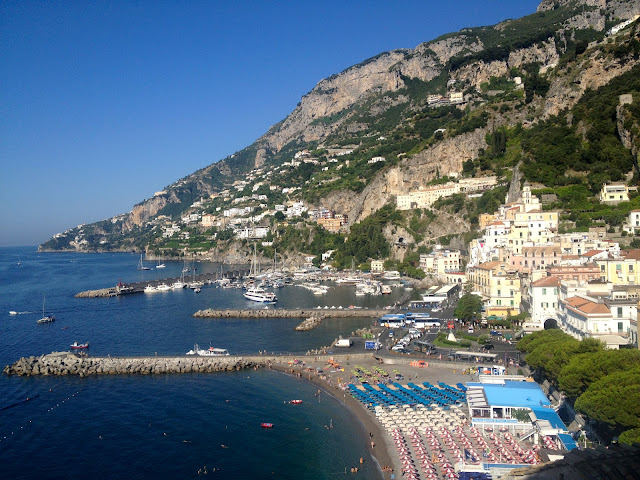 Elliott took this video of the scene as well as his two lovely ladies:

We couldn’t wait to see the town so we set off on a short walk to shop for some fruit. Lena enjoyed a fresh apricot (she’ll eat five a day) on the steps of the church in the middle of town. 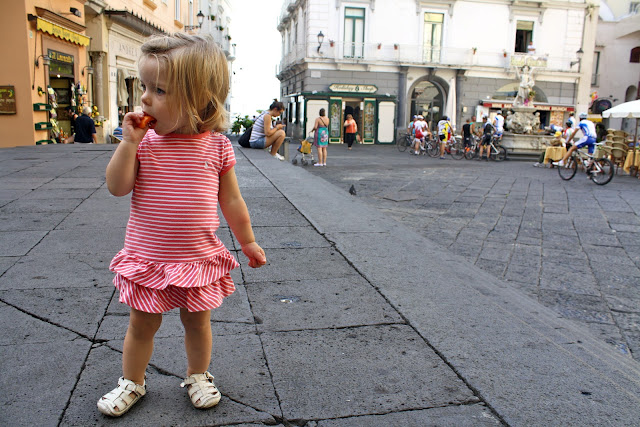 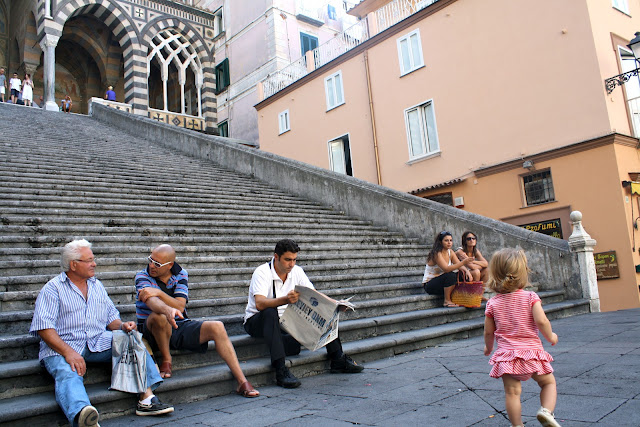 Later that morning we all walked back down to the beach below our apartment for surf and sunshine: 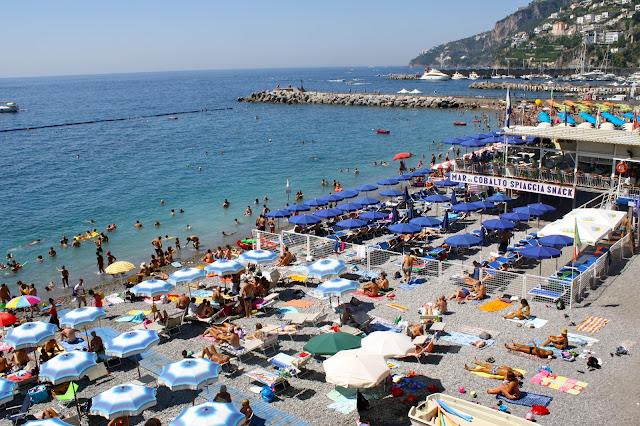 The individual lidos are demarcated by the different colored umbrellas.  If you choose to go to a lido, you will pay between 3-5 euro for a day’s use of an umbrella and a couple of lounge chairs.  As always, we chose to pay nothing and laid our towels down wherever we could find space. 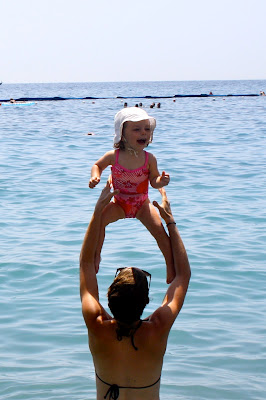 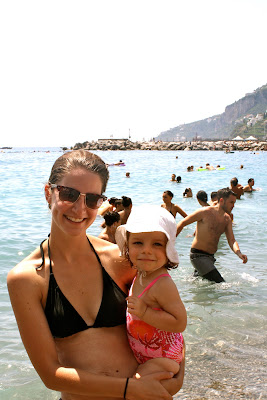 photos by Jess Garber
Check it out, Lena is actually looking at the camera and smiling! 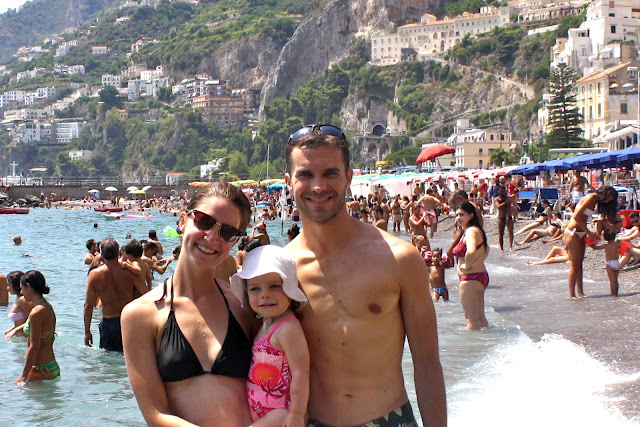 Finally, after Lena’s afternoon nap, we hopped into our car and drove about 20 minutes up into the hills to visit the magnificent town of Ravello.  To my surprise, Ravello was my favorite of all the Amalfi Coast towns we visited, although it’s far from the coast.  The beauty of the mellowed-by-time buildings, the peace in the many blooming gardens, the spectacular views down green hills to the coastline, the clinks of cutlery on crystal in the piazza-side cafes, the bursts of color from pottery shops, and the overall understated charm of the whole town completely drew me in. 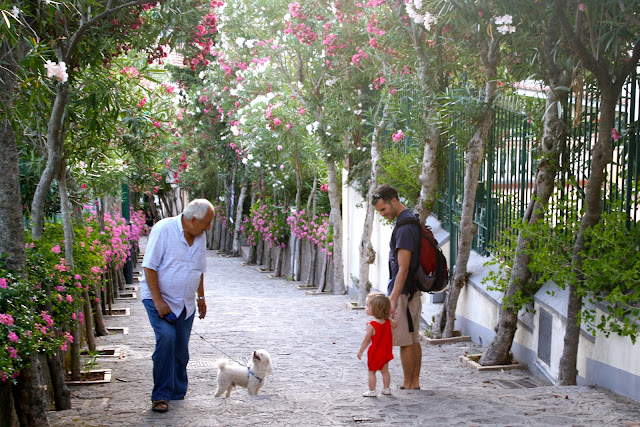 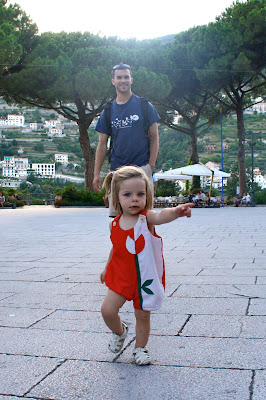 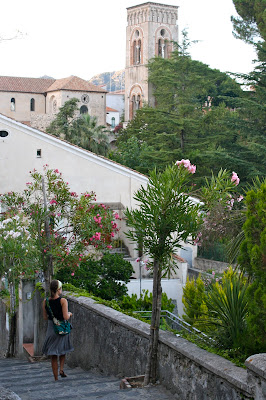 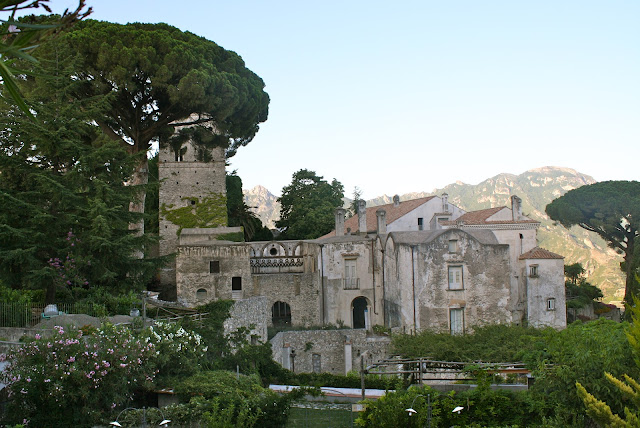 The magnificent Villa Rufolo, which I imagine Mark Ruffalo lives in between filming movies. 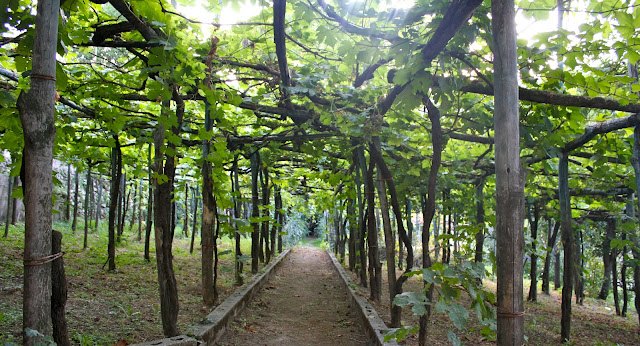 Old vineyard just outside the center of town. 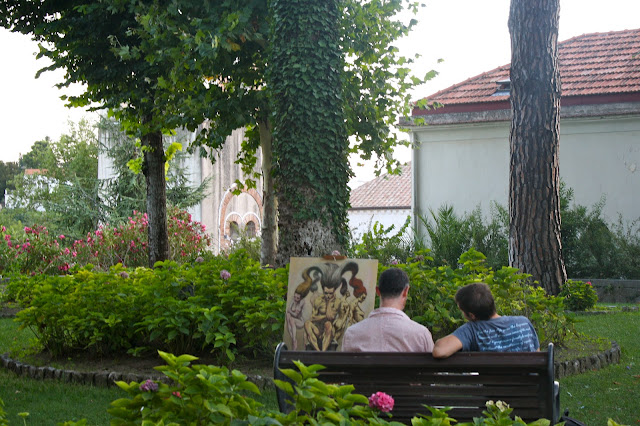 Quiet garden where a father and son were painting together. 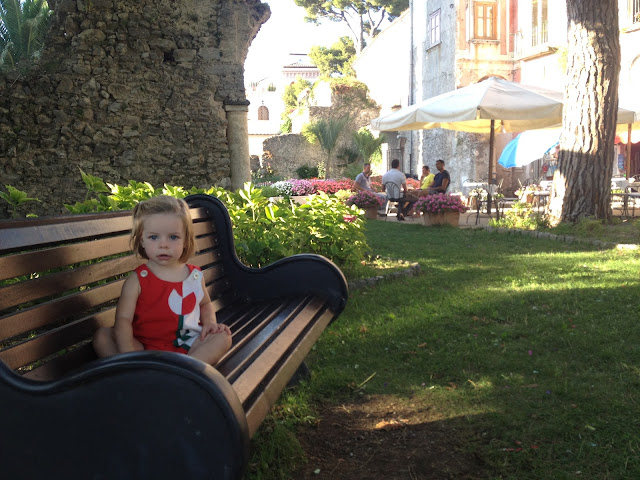 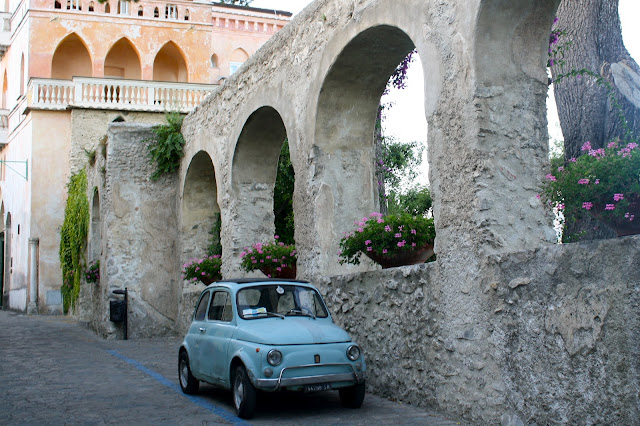 A cinquecento (or “500,” named for its 500 cc engine), the quintessential Italian car.
I took the video below of Lena climbing steps in Ravello.  I love how she grunts after each step.  Such an effort for little legs!
We returned to the town of Amalfi and almost had a heart attack when fireworks started exploding right outside our window.  Later we learned they were to celebrate the festival of Our Lady of the Snows.  Italians, who love all festivals and any excuse to shoot off fireworks, were commemorating a legend from 4th century Rome in which snow fell in August.  A parade of boats streamed from town to town along the coast and each town obliging shot off fireworks late into the night. 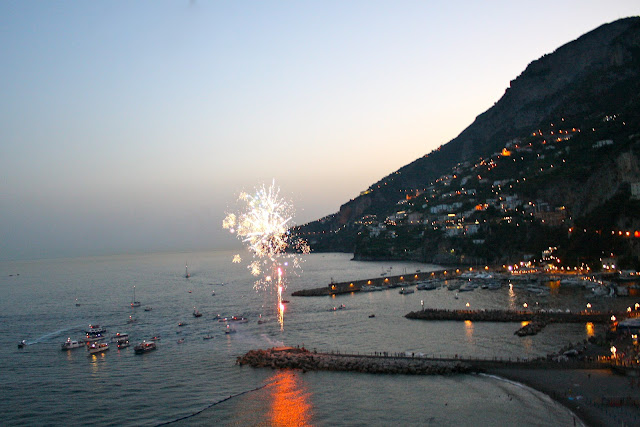 Elliott and I put Lena to bed and left Jess in charge, and then dressed up a little and headed into town on a date!  We’d both been craving a meal of fine seafood, and Elliott had researched for an hour earlier that day to determine an appropriate restaurant.  He settled upon Ristorante Marina Grande, an establishment that prides itself upon upholding sustainable fishing practices and serving locally caught seafood and locally grown food.  It was a perfect choice. 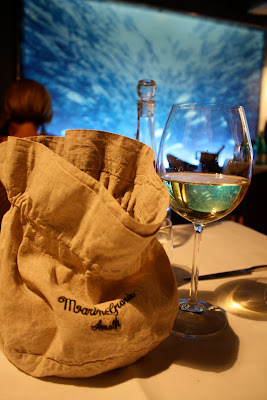 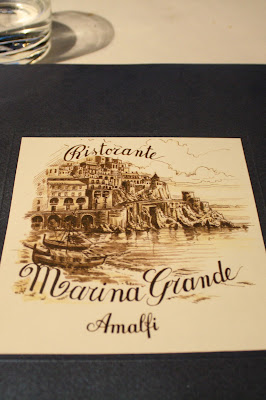 I love their bread bags instead of baskets… and the beautiful drawing of the town of Amalfi on the front of their menus.  We could find our apartment in the drawing! 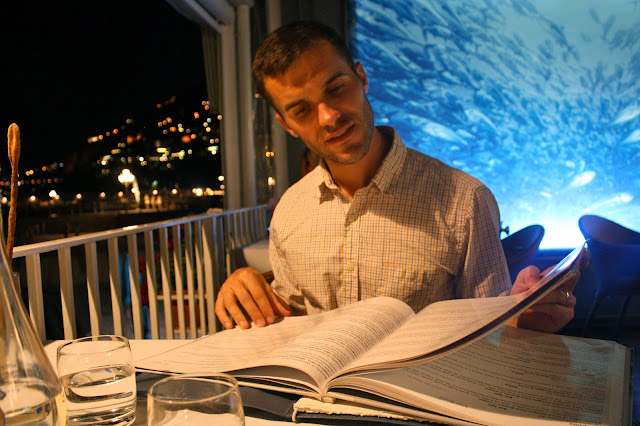 Elliott perused a wine menu that was almost as big as he was.  To begin, we chose the tasting of seven appetizers, which included seven vastly different types of seafood.  For a main course I chose the homemade rosemary gnocchi with prawns and oranges (there were a lot of flavors goin’ on in that one… almost too much for a pregnant woman to handle) and Elliott chose a dish bursting with seafood: linguine twisted around shrimp, calamari, and several kinds of shellfish. 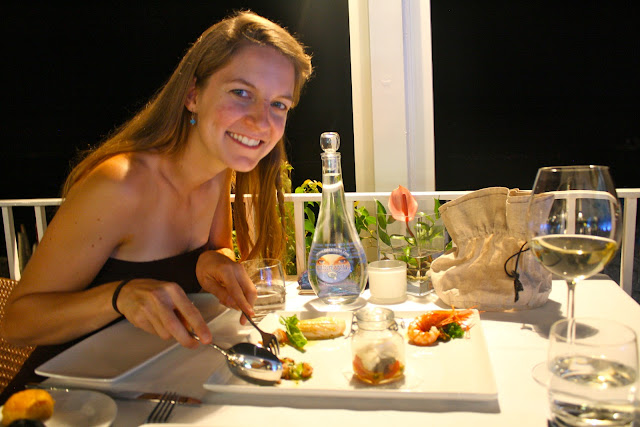 That was our last day on the Amalfi Coast, at least on this trip.  We must come back!  We drove down the coast the next day and enjoyed our first stay at an agriturismo that night.  Tomorrow I’ll have some photos of Lena with pigs and horses and kittens (oh my!).

29 Responses to Ravello, caught between earth and sky