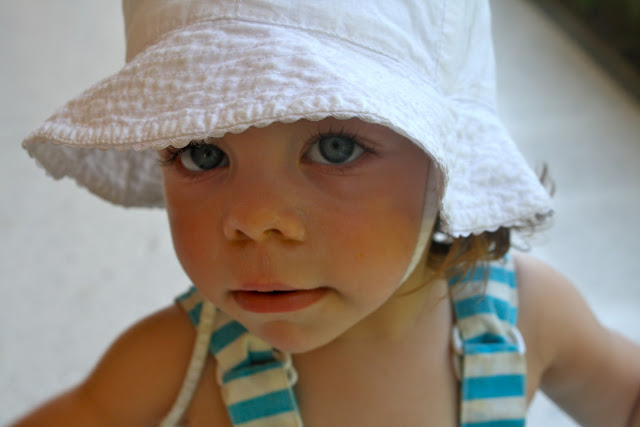 Are you thinking, “They visited Pompeii!” after reading that title?  Well, you’d be so close… but no cigar.  Indeed, Pompeii was buried by Mt. Vesuvius’ overwhelming eruption in A.D. 79, is right outside of Naples, and is a huge tourist attraction.  However, the advice of our guidebook and friends who live around Naples was: “Skip Pompeii–it’s boring, huge, hot, and there isn’t much to see–and go to Herculaneum instead.”  Our guidebook said Herculaneum was a smaller town near Pompeii that was also buried by the same eruption of Vesvius, but it was discovered later and better excavated, thus meaning there is much more to see.  As “visit Pompeii” was never on our bucket list of life, we swapped one out for the other. 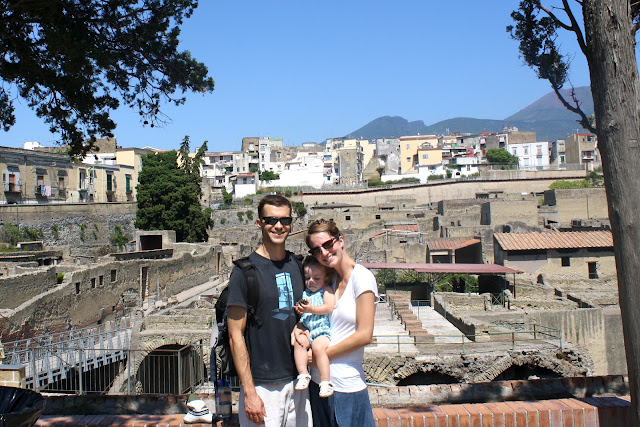 About to descend into the ancient buried city of Herculaneum (and all Lena cares about is her pine cone). 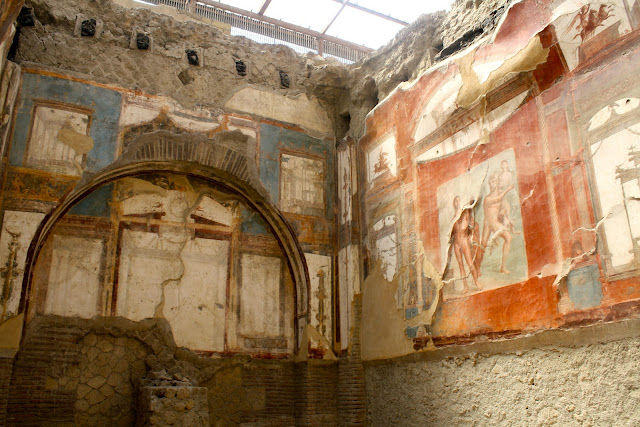 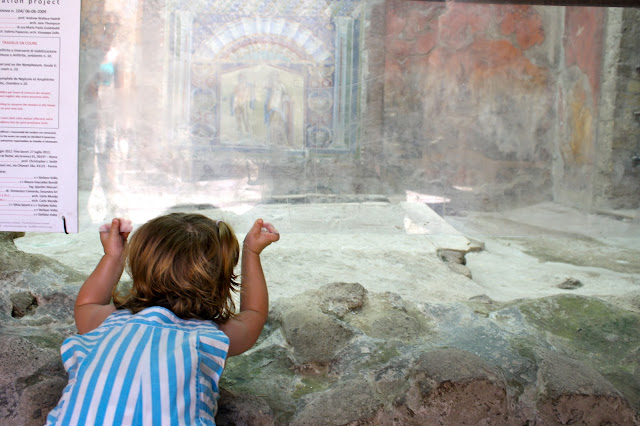 Peering under the glass at more preserved frescoes. 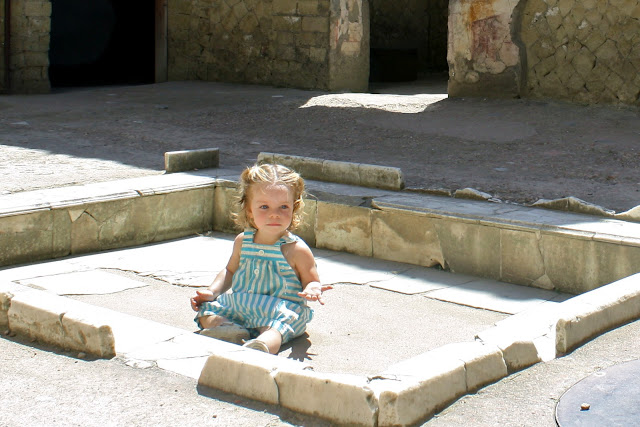 “Umm, guys… I climbed into the pool but where’s the water?” 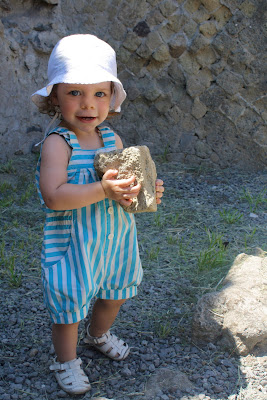 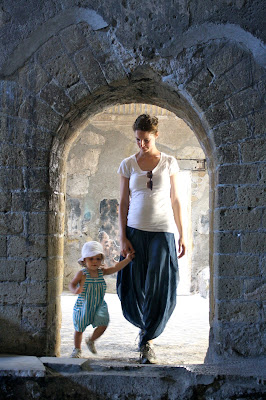 Do you like my totally funky pants?  I bought them in Naples after admiring them last week on a young Italian woman.  They’re like harem pants but each leg is made of two pieces of fabric and so they are slightly open on the outside of each leg.  They’re super cool and comfortable, and I can definitely see them becoming a pregnancy wardrobe staple.  (I also say this because I definitely look preggo in this pic!) 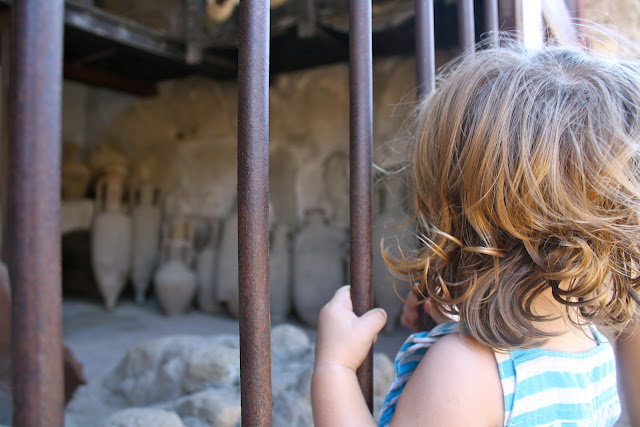 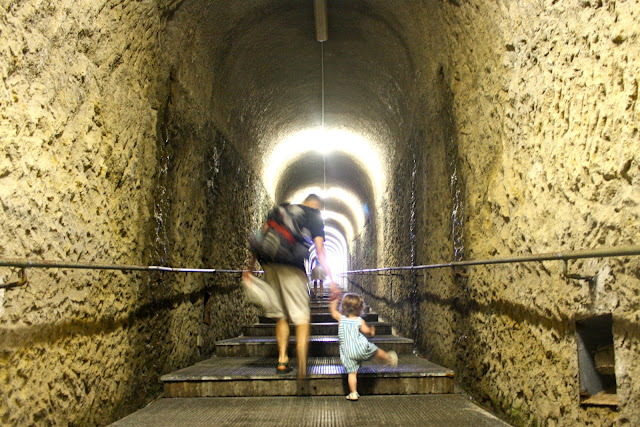 Lena climbed all the stairs (approximately 100) leading out of Herculaneum and up to regular ground, grunting with effort after each one.  So cute.
We left the ruins and the shadow of Mt Vesuvius and drove a couple of hours south to the Amalfi Coast.  Famed for its winding highway over the water that links beautiful beach towns together, this is one of the top tourist destinations in Italy.  We took a break from our drive on one of the beaches and Elliott and Lena collected sea glass. 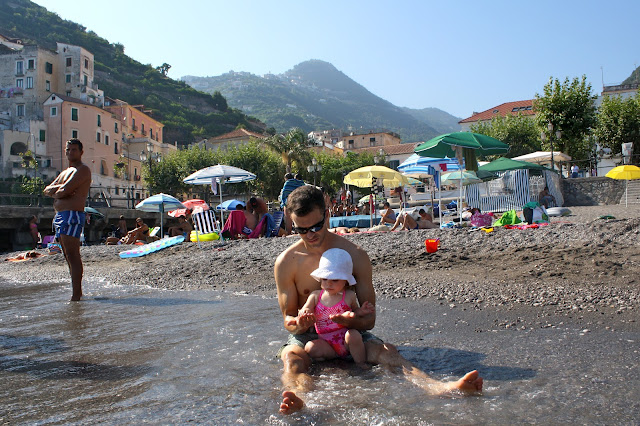 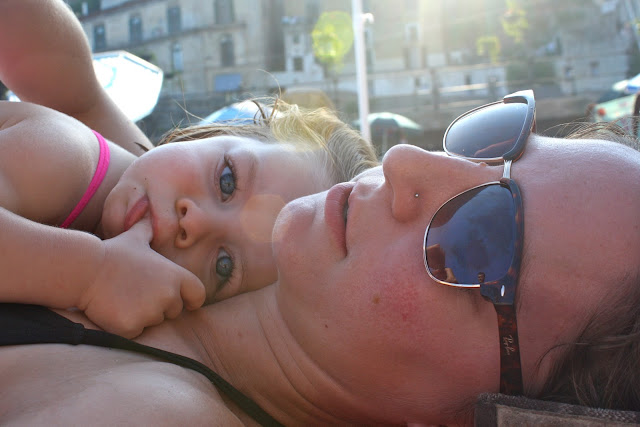 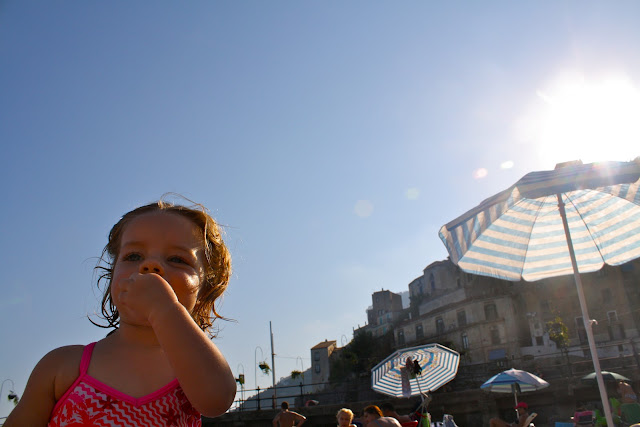 Later that evening we arrived in Amalfi, one of the most famous little towns on the Amalfi Coast.  By then I was carsick from the winding road but so in love with the area!  The sun was setting as we moved into our little 2-bedroom apartment and gazed out from our balcony at the peaceful town, quiet beach, and crystal clear blue water.  More photos tomorrow…. 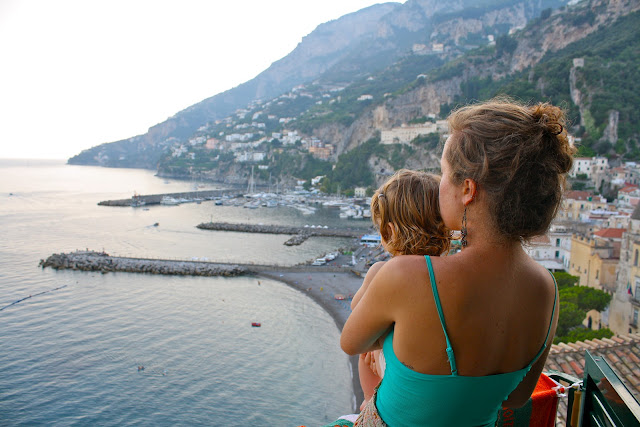 8 Responses to buried by Mt. Vesuvius