You’ve heard of snow days, but… rain days?  We hadn’t heard of them either.

The rain started yesterday.  Elliott suggested at lunchtime that I should perhaps close the shutters around the house, just in case.  Our Italian house has thick old wooden shutters for each door and window.  We’ve learned the hard way that leaving them open, rain or shine, means bad things when the rain comes.  So yesterday afternoon I closed most of the shutters, and then that evening I shut a few more.  We had a couple potted plants in our bathroom window so I didn’t bother with that window.  Oh, and we took the shutters off our gigantic kitchen window months ago (we want to see the valley and Mt Etna all the time!), so there was nothing to shut there.

The wind picked up during the night but we slept like babies.  Around 6:15am Lena woke up, as she always does, and I went into her room to nurse her.  I couldn’t believe the racket in there.  The wind was whistling around the cliffs beneath our house at a million miles an hour, throwing rain right through the thick shutters.  Wind was traveling right through the AC/heater unit over my head, making a shrieking nose.  I turned Lena’s sleep sheep/noisemaker back on and slipped back into our room.

The racket was even worse in there.  The wind whipped along our balcony around the edge of the cliffs, carrying debris with it and undoubtedly sweeping our balcony clean of anything we’d been foolish enough to leave out there.  (Our kitchen rugs hung out to “dry”?  Our potted plants?  Would we ever see them again?)  Even opening the doors between bedrooms took some strength because of the suction created by the wind.  I felt like I was yanking open the door of the fridge when I pulled open the door to our bedroom.

At 7am Elliott’s alarm went off, which was just as well because we were both lying there in the dark anyway.  A few minutes later his phone rang.  It was one of his soldiers.  Should he cancel all the veterinary appointments for the day?

A few more minutes passed.  Elliott checked Facebook on my phone.  School buses were leaving to pick up kids for the base school, but Elliott wasn’t sure if he should leave the house himself.

A few more minutes.  Elliott checked my phone again.  And this time… an astonishing turn of events.  The base was closed!  All non-essential personnel were ordered to stay home and stay safe.  We looked at each other with glee.  We got a “rain day”!  No snow days in Sicily… but rain days, well, we’ll take ’em!  And when the scene looks like this outside of the base, you can see why they decided to keep everyone at home. 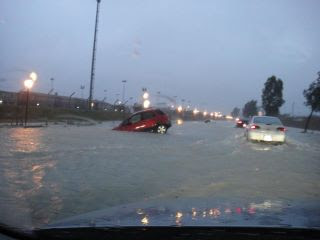 Elliott said he would go brew us some coffee.  I got out of bed, yanked on my pants. “I want to be with you to assess the damage.”

We opened the door to our room and starting flipping on lights, examining our house to see what had flooded, what had been blown away, and what shutters and windows were still in place.  Our potted plants hadn’t made it, sadly.  They were smashed on the balcony and only scattered pieces of them remained.  Our kitchen rugs were still out on the balcony, but they had been ripped off the line and were lying in matted messes against the railing.  We walked on to the kitchen, where Elliott spotted the water first.

There was a deep pool of water underneath our kitchen window, with more pouring steadily in.  We switched from slippers to rain boots and began to slosh through the dining room (also partially flooded) and into the kitchen.  I guess the floor slopes in the direction of the big window because the water hadn’t continued towards our kitchen cabinets and food items.  Water blew in our faces as we stood in the puddles; it was being blown through the hinges of the windows and was also coming from new leaks in the ceiling.  We blinked in the onslaught, getting our bearings.

And then we did the only thing we could do: pulled out a bucket and broom and started cleaning up the mess.

Here’s a video from midway through the mop up:

We continued to clean up for most of the day, especially as the rain and wind abated in the evening.  There is more rain and wind predicted for tonight and tomorrow, though, so we’ll see what the morning brings us!  In the meantime, we’re tucked cozily in front of the fire, knitting, reading, and writing letters to family.  The perfect rain day.

"rain day" in Sicily
snapshots on a Friday

6 Responses to “rain day” in Sicily